Kosovo’s energy system faces the dual problem of rising energy demand and stagnating supply, which is
produced and transported in ageing infrastructure.
Recently, electricity demand has spiked due to the inefficient usage of electricity for heating in residential
homes. The answer to this structural problem will also be reflected in the government’s upcoming Energy Strategy. It will have to consist of energy efficiency measures to lower demand and reduce losses, new sources of heat and electricity from renewables (wind,
solar), gas or even coal, supported by imports from neighbouring countries and liberalised energy markets to incentivise investments exactly where needed.

Kosovo’s energy demand is growing quickly. Since 2000, the country’s final energy consumption has roughly doubled, growing annually by approx. 4%. Energy is mainly consumed in the form of oil, wood, and electricity. Meanwhile, Kosovo’s main energy source is coal, as 97% of electricity is generated with it.

The largest consumer of energy is the residential sector, using approx. 40% of available energy, mainly in the form of electricity. With hardly any district heating capacity available and low electricity prices, many households use inefficient electric radiators to keep warm.
This has significantly exacerbated the current energy crisis. The transport sector consumes 30% of available final energy, the second largest share of energy, mainly in the form of oil. Then follow industry (19%) and commercial and public services (10%). On average, energy consumption per GDP is twice as high as in the EU, while energy consumption per capita
is far lower: only one third of the EU average. This is mainly due to Kosovo’s low GDP per capita, as most energy is consumed in people’s private lives (residential
and transport), not in industry and services, thus not adding to GDP. Meanwhile, net energy imports (total imports minus exports) have been increasing steadily over the last decade, both in absolute and relative terms. Now, Kosovo imports almost one third of its total primary energy supply (TPES).

Driven mainly by residential consumers, electricity demand has more than doubled in the last two decades. With the prospect of a growing population and growing
GDP, electricity demand will further increase. Exacerbating the problem, electricity demand recently spiked, when many households switched to heat their homes
with the price-capped and therefore cheap electricity instead of using the more expensive wood pellets. Another more structural challenge are the high transport losses: More than 20% of produced electricity are lost on the way to final consumers. Due to these inefficiencies, Kosovo’s demand for electricity outstrips supply: Despite a large potential for
both fossil and renewable energy supply, the country relies on expensive imports to match demand in moments of high consumption. It also exports electricity, but mainly at night, when prices are low. While net electricity imports account for less than 5% of electricity consumption, the current system of imports at times of high prices and exports at low prices is costly for Kosovar energy suppliers. Kosovo’s domestic production of electricity almost entirely rests on the country’s large coal reserves. It produces 97% of its electricity burning lignite in its two old and emission-intensive coal plants “Kosovo A & B”. The
two plants are prone to disruptions (with Kosovo A running less than 40% of the time), and in need of repairs or a final shutdown. Their high emission levels are violating the EU’s Large Combustion Plant Directive, which Kosovo must implement as a member of the EU’s
Energy Community. It currently is undergoing a dispute settlement process with the Energy Community.

As Kosovo’s domestic electricity supply is not matching the rising demand, and in need of structural repairs, the country quickly needs new energy sources. The International Renewable Energy Agency sees wind and solar potential of almost 3,000 MW, able to produce a combined 4,600 GWh per year. In the following solar resource map, the best available spots for solar energy are coloured in a dark red. 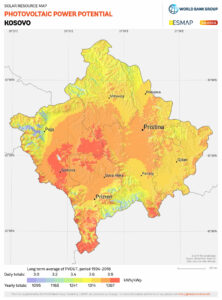 This would theoretically suffice to cover current electricity demand. In the medium term, it would however only be enough if households start to use more efficient
heating technologies, and grid losses are cut to a minimum.

Additionally, renewable energy sources often cannot be used in exactly the moment they are produced. The technology to store them already exists and is affordable. But building a secure electricity grid that sustains a high share of wind and solar power needs detailed planning and a well-regulated, yet open market to incentivize investments exactly, where it is needed. The new energy strategy currently developed by the government is drafting exactly such a plan. The German Economic Team is already carrying out an
analysis of potential energy storage technologies and
will support the planning of Kosovo’s future energy system by collaborating with the government on the energy strategy. The liberalisation of the electricity market is advanced,
as distribution and transmission companies have successfully been unbundled. However, the retail market still features artificially lowered prices. When prices rise
in a free market, poor households should receive support to prevent energy poverty. The German Economic Team will suggest short-term measures to alleviate the
pressure of price rises on households.

About the German Economic Team

The German Economic Team is financed by the Federal Ministry for Economic Affairs and Climate Action. Berlin Economics is commissioned with the project implementation.

*Advisory activities in Belarus have been suspended.