On 16 March 2022, the continental European electricity grid and the grids of Ukraine and Moldova became connected. Prepared since 2017, this step was now made as an emergency synchronisation against the background of Russia`s invasion of Ukraine. Originally, synchronisation was planned for 2023 at the earliest.

What does synchronisation mean? Have all the preparatory steps been made? What does this step mean for energy security, for the market, for Ukraine and Moldova, and for other countries in continental Europe?

The achievements by the transmission system operators (TSOs) involved open up opportunities for joint electricity trading and a coordinated climate policy. On that way, next steps include the transformation of emergency synchronisation into a normalised process and operational safeguarding.

Ukraine’s synchronisation implies connecting the large 50 HZ AC system of continental Europe with the Ukrainian (and Moldovan) electricity grid. Zero HZ DC connections are easy to implement because systems do not require to be synchronised. A DC connection works like a power plant switching on or off, ramp it up or down. It differs from an AC system: a mistake by one is the problem of all the others. This issue could be observed during the so-called “system-split” in Europe in 2006. Let’s not forget: electricity moves at close to the speed of light (299,000 km/s).

TSOs of Ukraine and its neighbours 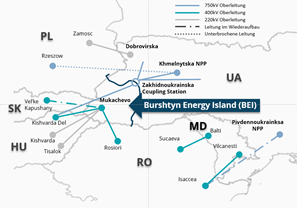 Synchronisation is therefore a very important sign of cooperation, and requires that all parties involved play by the same rules in order to maintain the frequency agreed. 50 HZ works in Europe in the East and West (also in Russia and its system), 60 HZ in the US and Japan is split in half between two systems. Until 23 February, Ukraine was synchronised with the Russian IPS/UPS system, which still includes the Baltic states, Belarus, Georgia and other CIS states. Once it was thought to link IPS/UPS and the European interconnected system UCTE: electricity from the Atlantic to Vladivostok.

How does synchronisation work technically?

Synchronisation is a process that takes several years and is carefully prepared by highly professional engineers. In the joint work of various TSOs (in this case Poland, Slovakia, Hungary, Germany, Romania), involving ENTSO-E (Association of European Transmission System Operators), with the participation of renowned technically experienced institutes, such as the Polish State Institute for Power System Engineering, Gdansk Division, a catalogue of measures is worked through until all technical prerequisites for synchronisation are met. In this case Ukraine and Moldova interrelated in terms of electricity, were synchronised together. Ukraine and Moldova have almost completely worked through the catalogue of measures. Two things were still missing before the outbreak of the war: firstly, proof that the Ukrainian power system is stable on its own – so-called island tests were planned for February and June 2022 for this purpose; secondly, the management of so-called interregional frequency deviations, which the Polish state institute had noted as a risk in a study in November. For this, technologies such as Statcom or the M-SSSC or even batteries can be used, which requires a certain lead time.

When all measures have been processed, then synchronisation takes place. In the Ukrainian case, this is not too complicated; connections to Hungary, Poland and Slovakia already existed.

On the Moldovan side, the connection is connected to Bulgaria and Romania and was first completed to Romania on 16 March. In case of synchronisation, the respective country must disconnect itself from countries that are not synchronised. The central European countries of Poland, Hungary, the Czech Republic and Slovakia have been synchronised since 1995, the Balkan countries even before that. In 2015, Turkey (TSO Teias) was synchronised, after more than ten years of preparation and five years of trial operation. As mentioned above, Ukraine conducted the island tests just before the war. The original data was however postponed from early February to 23 to 27 February. In retrospect, this delays is like a presentiment of the war.

From emergency synchronisation to the market?

In the current electricity situation in Ukraine, which Ukrainian companies Ukrenergo and DTEK (producers, distribution grid operators) report on daily, the demand for electricity is very low due to the war: only 12-13 GW are currently being demanded of the approximately 53 GW of installed capacity. In order to prevent blackout risks, synchronisation was introduced: continental Europe could stabilise the Ukrainian grid as needed. Besides that however, no electricity is currently flowing through the interconnectors. Things would be different in the future: for many years now, Ukraine has made clear its intention to act as an important electricity exporter and energy policy partner of the EU. From the point of view of grid operation, the necessary reinforcement measures must first be taken to ensure stable frequency. In addition, Ukraine would also have to become a part of the various data platforms for market exchange. Ukraine is also a member of the Energy Community, the aim of which is to transfer the EU's acquis communautaire on energy to the member countries. In this context, important regulatory steps have already been taken. The application of climate protection measures is also of main importance: a situation should not arise in which the EU members commit to climate-neutral electricity generation, but climate-damaging coal-fired electricity is imported from the neighbouring country, or, in other words, completely different rules apply.

First of all, we must pay tribute to Ukrenergo's masterly achievement in successfully maintaining island operations under the unimaginable conditions of war. A remarkable achievement was also made by the TSOs united in the European umbrella organisation ENTSO-E, which were able to create the technical conditions for emergency synchronisation together with Ukrenergo in such a short time. European and US politicians and international financial organisations such as the World Bank have urged this step and assured the necessary support.

In view of the distortions of the security order in Europe caused by the war, the very symbolic landscape of electricity interconnections is also changing. The synchronisation of the Baltic States, for example, seems much more urgent than before and is also technically well prepared.

A future of electricity trade and a common climate agenda seem promising. However, the dynamic war situation currently makes it impossible to estimate when emergency synchronisation might turn into normalisation and a market. In any case, the immediate next step for Ukraine is to operationally secure synchronisation by installing the technologies already mentioned. Ideally, these measures would be completed in the summer or autumn of 2022.

About the German Economic Team

The German Economic Team is financed by the Federal Ministry for Economic Affairs and Climate Action. Berlin Economics is commissioned with the project implementation.

*Advisory activities in Belarus have been suspended.